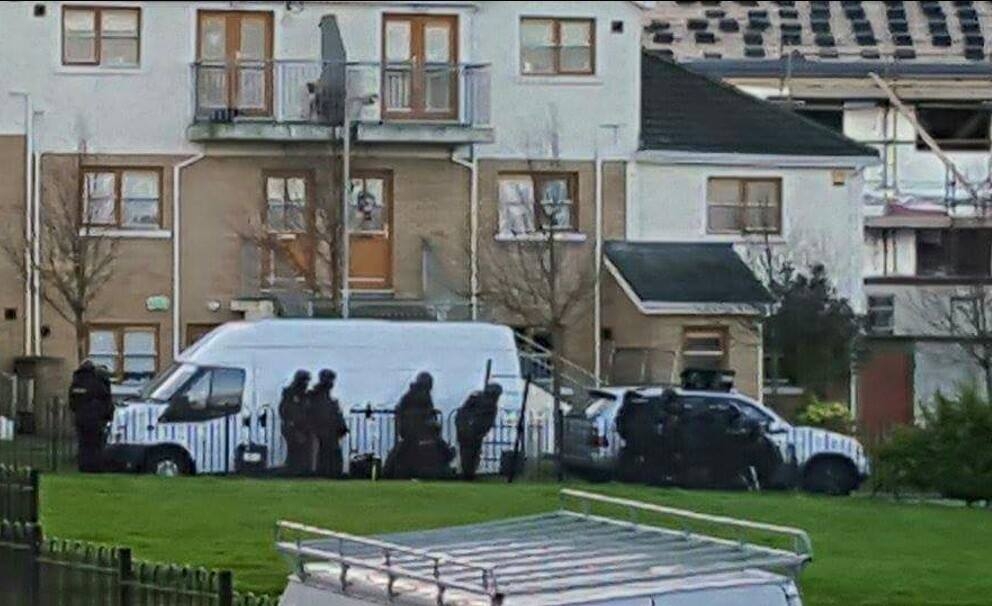 A man who discharged 37 shotgun rounds in the direction of gardaí in Tallaght to provoke them into killing him has been jailed.

Patrick Kinch (48) later told gardaí that he wanted to “go out in a blaze of glory” but believed he would not go to heaven if he killed himself.

Armed Gardai outside Kinch’s apartment in Deerpark in December 2015

Kinch of Deerpark Square, Tallaght, Dublin, pleaded guilty at Dublin Circuit Criminal Court to endangering gardaí by firing at them with a stolen sawn-off shotgun during a siege that lasted almost fifteen hours.

Judge Martin Nolan suspended the final three and a half years of a ten year prison term. Kinch also pleaded guilty to damaging the house where the siege took place and to causing over €7,000 worth of damage to a Garda vehicle.

Garda Rory Maher told the court that in the early hours of December 20th 2015. Natasha Donnelly, Kinch’s partner at the time, witnessed Kinch behaving erratically in the house they shared on Deerpark Square.

He said Donnelly thought Kinch had been drinking and had taken valium. She became afraid and fled the house along with her children.

The garda said that Donnelly was told by Kinch that she could get the gardaí but to “tell them to bring a body bag”. Donnelly drove to Tallaght Garda Station and alerted gardaí.

Gardaí spoke with Kinch while he leaned out of an upstairs window and Kinch said he would be down shortly.

Gda Maher said that two shots were fired from the window at 5am and the gardaí took cover behind the ballistic vehicle.

Further shots were fired over the next several hours while Kinch demanded that the gardaí shoot him.

“Death is natural” and “we all have to die, come on, take a headshot” were among the things Kinch shouted at the gardaí, according to Gda Maher.

Gda Maher said that around 2pm Kinch leaned out a downstairs window, pointed the shotgun at the gardaí and fired. The shot hit a fence and while two gardaí were struck with rebounded material, neither was injured.

He said the gardaí observed Kinch put the shotgun barrels under his chin. Kinch eventually threw the unloaded shotgun out the window and was arrested shortly thereafter.

Gda Maher said that gardaí discovered the inside of the house had been severely damaged by Kinch during the siege.

“I saw all of you and said fuck it, I wanted to go out in a blaze of glory,” Kinch said while interviewed by gardaí according to Gda Maher. Kinch said that he “didn’t give a shit” if one of the gardaí could have been killed during the incident.

Gareth Baker BL, prosecuting, put it to Gda Maher that Kinch believed he would not go to heaven if he committed suicide.

Michael Boland SC, defending, said that Kinch was the only one of ten siblings to be given up for adoption and placed in an orphanage when he was four years old.

Mr Boland said that Kinch had been close to one of his sisters who died in 2011. He said Kinch had been motivated partially by “wanting to be with her coming up to Christmas.”

He said that Kinch’s probation officer had twice brought Kinch to hospital and demanded he receive psychiatric care in the days leading up to the siege.

Judge Nolan commended the actions of the gardaí, stating that they “displayed huge restraint and professionalism in their dealing with Kinch.” The State had “a responsibility to prepare him for release”, he said.