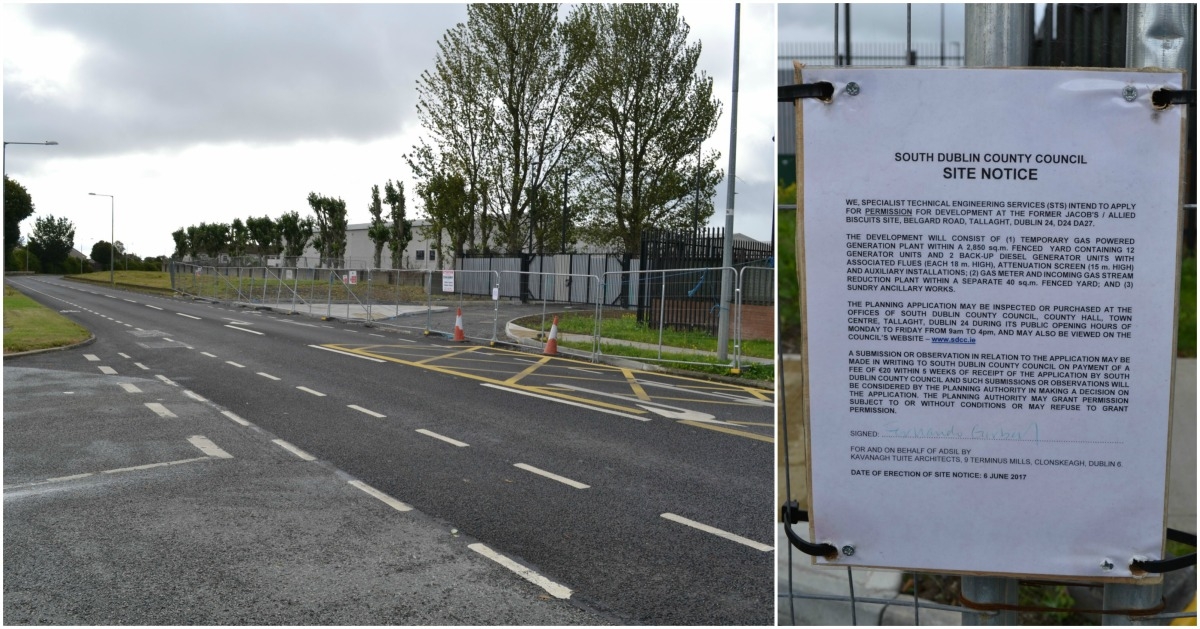 RESIDENTS have voiced concerns over Amazon “slipping in” a planning application for a temporary gas-powered generation plant on Mayberry Road.

The application was advertised in the Irish Examiner newspaper, which is on South Dublin County Council’s approved list of publications, despite the fact it’s primarily circulated in Munster.

One of the public notices of the application for planning permission on the site of the proposed development is fronting directly onto Mayberry Road.

The proposed development concerns a portion of the site of the former Jacob’s Biscuit Factory, where Amazon has been given planning permission to build a data centre.

A local resident told The Echo: “This application is for the installation of gas generators and back-up diesel generators, essentially a power plant.

“I cannot believe this. This is so close to residents and housing.

“I cannot believe how under-hand and sneaky this application was.

“The sign is erected in such a dangerous position that no one would be able to see it without risk of getting killed on the Mayberry Road.”

There are also provisions for a gas meter and an incoming gas stream reduction plant within a separate 40 sq m fenced yard.

The closing date for third party submissions on the application has now passed.

Speaking to The Echo, Fianna Fáil councillor Charlie O’Connor said: “The company slipped in a planning application and that has certainly upset a lot of people.

“The fact they advertised it in the Examiner certainly annoyed people.

“The residents are annoyed that they didn’t know about it, and they’re worried about the affect the generator might have on the local community.”

A spokeswoman for SDCC told The Echo: “South Dublin County Council has a list of approved newspapers for the purposes of advertising applications for planning permission.

“Applicants may select from this list and place their advert. The Irish Examiner is a national newspaper with considerable circulation.”

The spokesperson added that she cannot comment on this specific application, as it is still under consideration by the council.

A decision on the application is due from South Dublin County Council by August 1.

An Amazon Web Services spokesperson told The Echo: “The redevelopment of the Former Jacobs/Allied Biscuits Site on Belgard Road is being done in accordance with applicable planning requirements.

“The application is clearly available to anyone who is interested and can be downloaded from the South Dublin County Council’s website.”