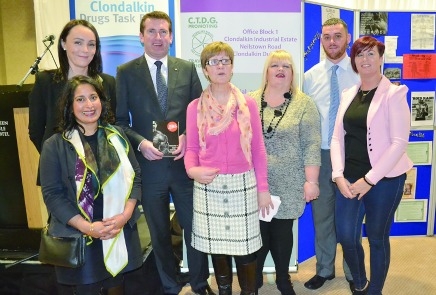 CLONDALKIN Drugs and Alcohol Task Force (CDATF) launched a pair of booklets this week to raise awareness of risks associated with steroid and tanning injections.

Minister of State for the National Drugs Strategy Aodhan O’Riordain attended the launch of the booklets at Green Isle Hotel on Tuesday to launch 'Natural Glow' and 'The Juice.'

The purpose of the campaign is to prevent and raise awareness of the risks associated with steroids and tanning injections amongst young people in the traveller and settled community.

CDATF collaborated with the Clondalkin Travellers Development Group over six months to design the programme and ensure it was culturally appropriate and based on recognition of the specific needs within the the traveller community.

Sandra Mullen, Coordinator CDATF said: “Recently, locally based service providers in the Clondalkin area raised concerns about the increase in the number of young people presenting to services looking for information and support regarding the use of steroids and tanning injections.

“Similar issues began to emerge within the traveller community and while the numbers of young travellers involved is small given the specific risks factors facing young travellers, the need for a prevention and harm reduction campaign targeted specifically at young travellers was identified.”

The aim of campaign is to provide accurate and accessible information to young people to support them in making healthy choices, to inform them of the risks associated with injecting steroids or melanotan and how to use safely.

Working in partnership with members of the traveller community was seen as vital to the success of this initiative.