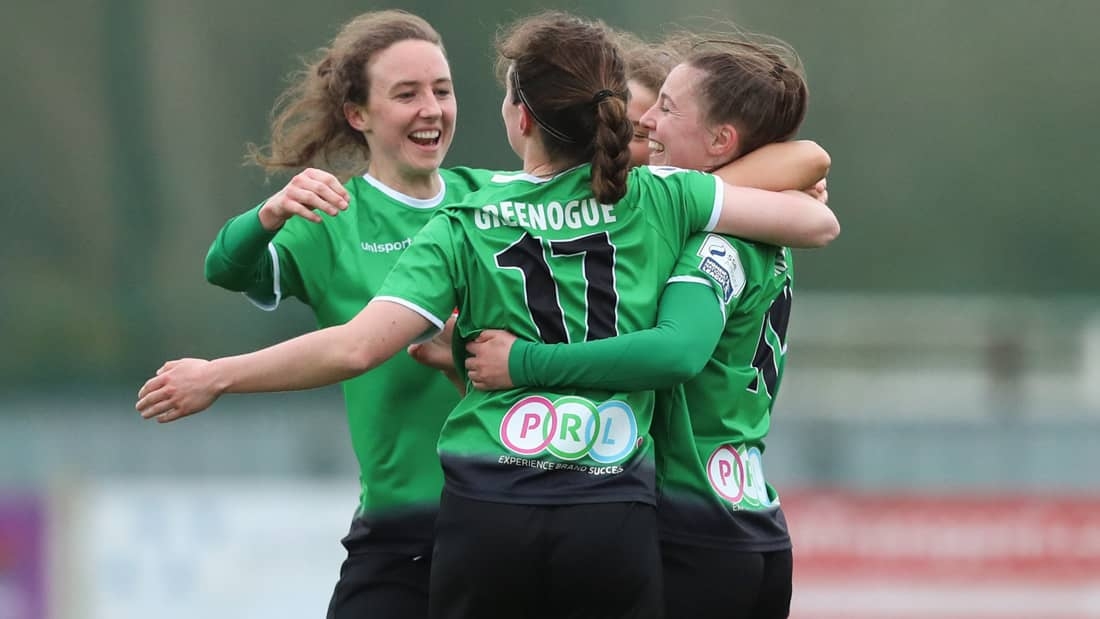 IN THE space of 70 seconds at Ferrycarrig Park last Saturday, Peamount United’s opening game in the defence of their Women’s National League crown was turned completely on its head.

With the sides deadlocked in the 85th-minute, Kylie Murphy had a golden opportunity to squeeze hosts Wexford Youths in front from the penalty spot. However, her 12-yard strike was tipped onto the post by Republic of Ireland international Niamh Reid-Burke.

Peamount subsequently worked the ball up the field and Eleanor Ryan-Doyle curled a superb effort to the top right-hand corner of the Wexford net from an acute angle.

“The pass was given to me and I just thought ‘first time, you’re just going to have to hit it and hope for the best’. Lucky enough I got it in the top corner,” Ryan-Doyle said of her match-winning finish.

“There was great belief in our team that we could go and save that penalty, and go on and score a goal, come home and have points on the table after the first round of matches.”

Those who were watching the game online – through a broadcast provided by the FAI’s new streaming service, LOITV – will have noted that the video camera was shaking on a number of occasions. This gives a sense of how tricky conditions were for Ryan-Doyle and her team-mates in the south-east venue.

“The weather wasn’t great Saturday with the wind and the pitch was a bit bobbly. For both teams the conditions were hard. It’s a tough place to go against a good team. We were delighted to come home with the win.”

Despite the departure of Ryan-Doyle’s fellow Lucan native Niamh Farrelly to Glasgow City, Peamount have returned in 2021 with a settled squad.

“James [O’Callaghan, team manager] has belief in the girls that were there and he believed that whoever was on the bench was well capable of coming on and doing the same job as the girls on the pitch,” Ryan-Doyle acknowledged.

“The squad of girls we have is strong and I think a lot of squad rotation is going to happen this season.

“Anyone can slot into any position when needed this season. With the group of girls that we have, it’s one that we can go on and be successful again with.”

Although their campaign has only just begun, Peamount have received a bye for this Saturday’s fixtures and will also be idle the following week due to the forthcoming international window. Therefore, their next competitive game won’t be until April 17 – a mouthwatering tie against 2020 runners-up Shelbourne in Greenogue.

“We’re going to have to believe in ourselves and know that we can do it, and win that match after having the two week break,” Ryan-Doyle said of their upcoming showdown with Shels.

“I think it’s important that we keep training and working hard. Get ready for that big match, because it’s definitely going to be one that could benefit us in the long-term” insisted Ryan-Doyle.