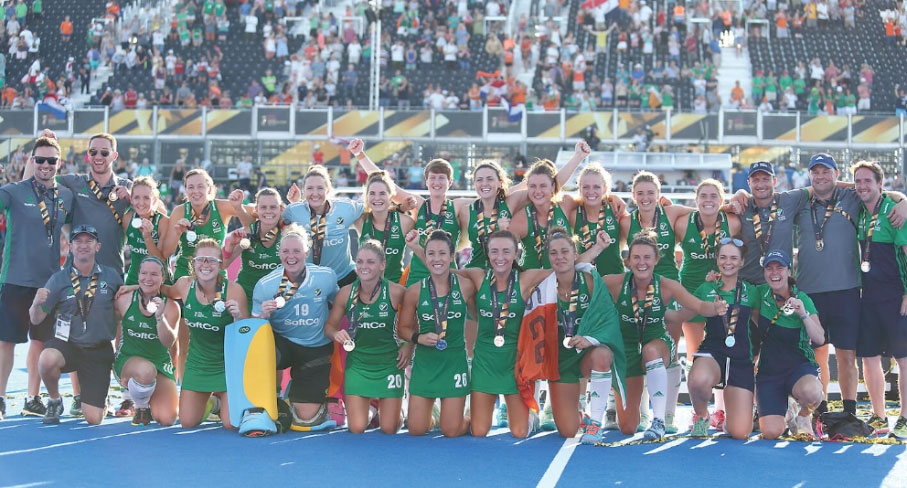 IRELAND Senior Women’s Hockey team head coach Graham Shaw has praised the dedication and togetherness of his side after they capture silver at the World Cup in London.

The Firhouse man was bursting with pride after watching his players march all the way to the final where they were ultimately beaten by Netherlands.

Ireland blasted out of their group following victories over USA and India and then demonstrated amazing mental strength to again see off India in a quarter final shootout after which they despatched Spain in a similar manor in penultimate rounds.

“The selfless attitude of these players is just amazing,” Shaw told The Echo. “When they spend time with each other you can see that they care for each other so that when these big moments come along they pull together.

“This achievement has not just come off a block of training. This has come from years of commitment and dedication by these players.

“They’re very player-led. Of course we guide them, but at the end of the day, they put in all the work and their commitment is just a pleasure to see.

“I think when you talk about the mental strength of these players, that comes with their experience of adversity.

“When you look at it, not qualifying for the Olympic Games after losing a shootout, these players could easily have let that affect them.

“But they put that aside and they learned from that. When things go wrong the players debrief what’s happened. They deal with it and learn from that experience.

“That’s part of our culture. We want to be continuously developing and learning from these experiences,” he said.

Pinnacle of his hockey career

For Shaw, who has achieved so much as a player and coach, this feat certainly marks the pinnacle of his hockey career so far.

And he was delighted at how much the nation valued the success of his team saying, “We’d been living in a bubble over there. We didn’t know what the impact would be at home.

“Never did I think that hockey would be celebrated on the streets of Dame Street with the roads being closed. It was just incredible.”

Still Shaw insists that the opportunity to build on this amazing achievement has to be grasped with both hands and that a long-term plan needs to be put in place if feats such as these are not to become just isolated peaks.

“If we want to be challenging in World Cups and for Olympic qualification we need a National training facility to plan the next generation of hockey players,” he stressed.

“We need to have our underage players under the same roof as our senior players so that they can see first hand the commitment that is required at that level.

“I’m not looking for a knee-jerk reaction [after the team’s World Cup success]. I’m looking for a long-term strategy where we can develop a platform for players coming through.

“There’s land out there in Abbotstown. It just needs the investment to develop a training centre.

“I’m not saying that Abbotstown has to be our home, but there could be a national training facility there.

“I don’t know how close we are to that, we’re probably not that far away, but we need to be part of that High Performance environment out there,” he insisted.