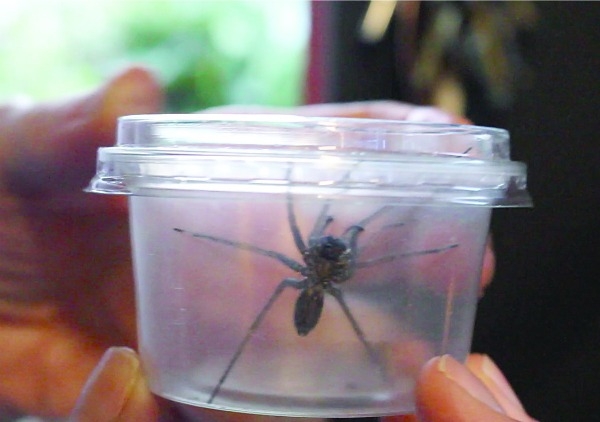 IN RECENT weeks, The Echo has been contacted by members of the public who are freaking out over spider invasions in their homes, a situation which has been heightened by media reports of giant, highly venomous spiders on the hunt for humans.

To find out why people are reporting an increase in the number of spiders lodging in their homes, we visited Tallaght resident Collie Ennis, who, working in the Zoology department at Trinity College, is a spider enthusiast, expert and researcher – who has a shed of creepy crawlies out his back garden.

Collie told The Echo: “Spiders are predators and they take down all of the other micro-fauna that we don’t like, such as flies and stuff that will eat your furniture, like wood lice.

“Spiders clean-up for you, they’re cheaper than Rentokil.”

When asked about reports of larger-than-normal, long-legged spiders in local homes lately, Collie said: “This is the European giant house spider and why everybody is seeing them at this time of the year is because the males are going off looking for romance.

“Another reason is that when chilly, spiders go into human dwellings to get warm, but generally males are out looking for females.”

He added: “They are not getting any bigger, even though we’re hearing reports of giant spiders attacking people.

“They are definitely not dangerous and pose no threat to your, your pets or your kids, they’re just doing what they do.

“There are been a lot of social media and press hysteria over these spiders, but it’s been a warm, muggy summer and there are lots of bugs around.

“Lots of bugs means lots of prey for spiders.”

The false widow spider, with the skull-like imprint on its back,is another specie of spider that has homeowners packing their bags and running for the hills.

However, according to Collie: “The false widows are getting a bad rep in the press and unjustifiable so.

“These are rather shy and illusive creatures that don’t want to be noticed . . . they want to be left alone to do what they do, which is to catch small invertebrate and eat them – which is very useful in your home.”

When asked about reports of people being hospitalised from a false widow bite, Collie said: “That can happen when you are bitten by anything that you’re allergic too.

“Every spider has venom, they need it to survive . . . but if you happen to be allergic to that venom, you will have a reaction, which can happen with bees or wasps too.”

For anybody who can’t live with spiders, Collie suggests using a glass and some paper to safely remove them from their home.