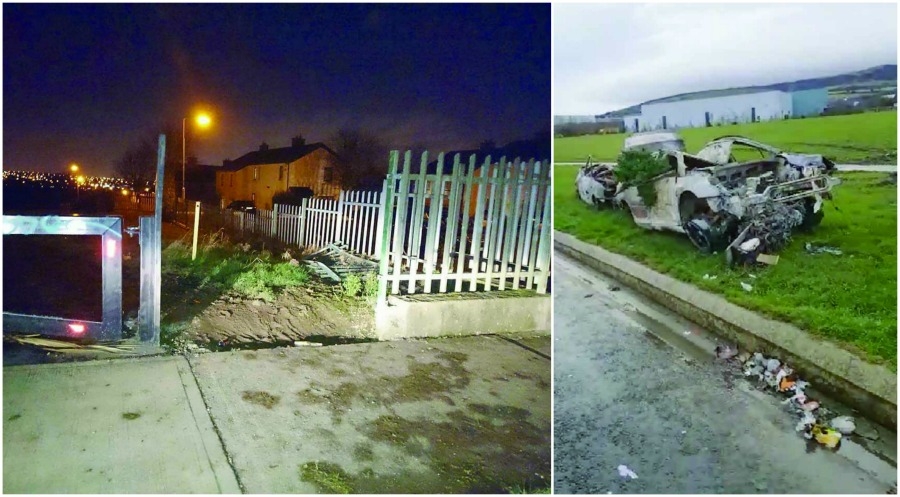 TWELVE burnt-out cars were collected from three neighbouring Tallaght estates in the past week, a growing issue which has led one local councillor to believe that end-of-life cars are being passed onto teenagers in an organised operation.

The issue of joyriding across estates is back on the agenda, with three burnt-out cars removed from Killinarden Park and three from Jobstown on Tuesday of this week.

In the nearby estate of McUlliam, six cars were also burnt out last Thursday – with a number of abandoned cars also lying across the estate.

Sinn Féin councillor Cathal King told The Echo that joyriding and the burning out of cars increased dramatically last year, with the growing trend endangering people’s lives and destroying green spaces and pitches.

Killinarden Park, which is the home ground for Croí Ró Naofa GAA club, is being regularly damaged by young people joyriding cars and then setting them alight on the pitches, with a section of the park’s perimeter fence also cut away to allow cars into the park.

Close by in Jobstown, cars are also gaining access to the green space adjacent to the Whitestown stream, which runs alongside the estates of Dromcarra and Bawnlea.

Cllr King said: “We haven’t had issues like this in estates for a long time but in the past seven to eight months, incidents of joyriding has 100 per cent increased.

“Something organised is happening. All of these cars are old and maybe it’s cheaper to off-load them onto teenagers instead of scrapping them.

“The fact that it’s happening across a number of estates from Killinarden into Jobstown and all the way up to McUlliam suggests that something organised is going on.

“Cars are also just being dumped in estates . . . and the kids are having a go in them before setting them on fire.”

He added: “Action has to be taken. This behaviour is intimidating residents and endangering people’s lives.

“It’s also destroying estates and community green spaces like Killinarden Park, which is impacting on local club Croí Ró Naofa – which is doing great work in the area.

“And it’s an extra cost to the council and the taxpayer to remove the cars and fix any damage caused.”

Cllr King has claimed that the council needs to examine how access to areas such as Killinarden Park and Whitestown stream can be prevented, while gardaí need to “step up” and provide better response times when contacted about joyriding – and also increase patrols in communities.

Cllr King has two motions on the issue lodged for this month’s Tallaght Area Committee meeting.

When contacted by The Echo, a senior Garda source said that they take a “multi-agency” approach to issues such as joyriding and work with local residents and the council, and that the station will respond to calls as soon as they can.