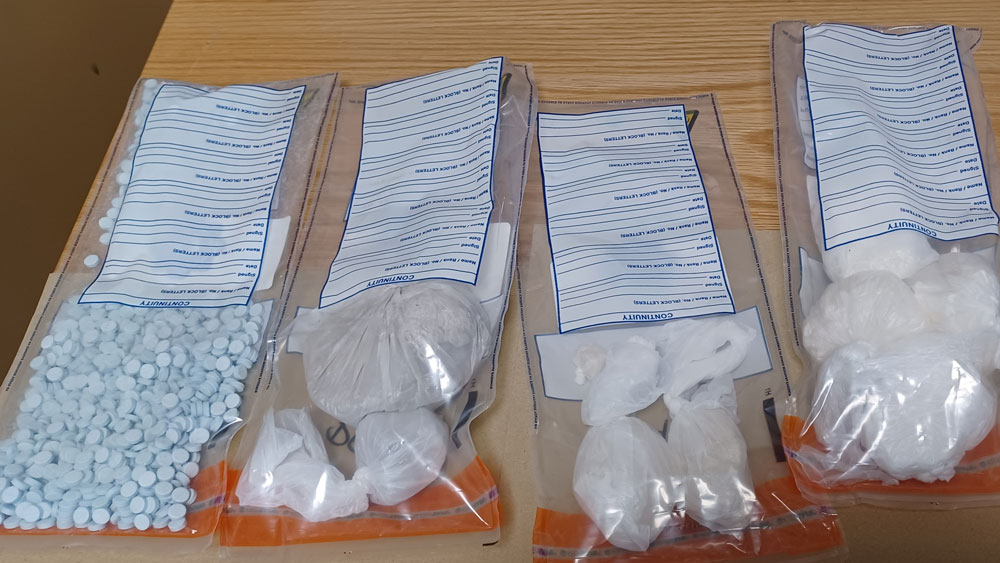 An image of some of the drugs seized by gardai in West Tallaght. Photo An Garda Siochana

TWO of the men, aged in their late teens and 20s, arrested on Friday, January 13 as part of ongoing investigations into organised criminal activity and anti-social behaviour in West Tallaght have been charged and appeared before the Criminal Courts of Justice.

During a Day of Action targeting Organised Crime and Anti-Social Behaviour in West Tallaght, at 7am on Friday morning, six residential properties were searched by gardai from the Tallaght district, resulting in the arrest of seven males.

According to Gardai, in the course of the searches, controlled drugs, including quantities of heroin and crack cocaine (analysis pending) worth in excess of €40,000, and €10,000 in cash was also seized.

Of the seven men arrested on Friday, one male youth, aged in his teens, was released pending a referral to the Garda Youth Diversion Bureau.

A male, aged in his 40s, was also taken to Mountjoy Prison on foot of committal warrants according to gardai.

A man, aged in his 40s, was charged and station bailed to appear before Tallaght District Court on February 9.

Two men, both aged in their 40s, were released without charge and gardai say investigations are ongoing.

The operation was led by the District Detective Unit and Community Policing Units at Tallaght Garda Station in collaboration with community stakeholders and South Dublin County Council.