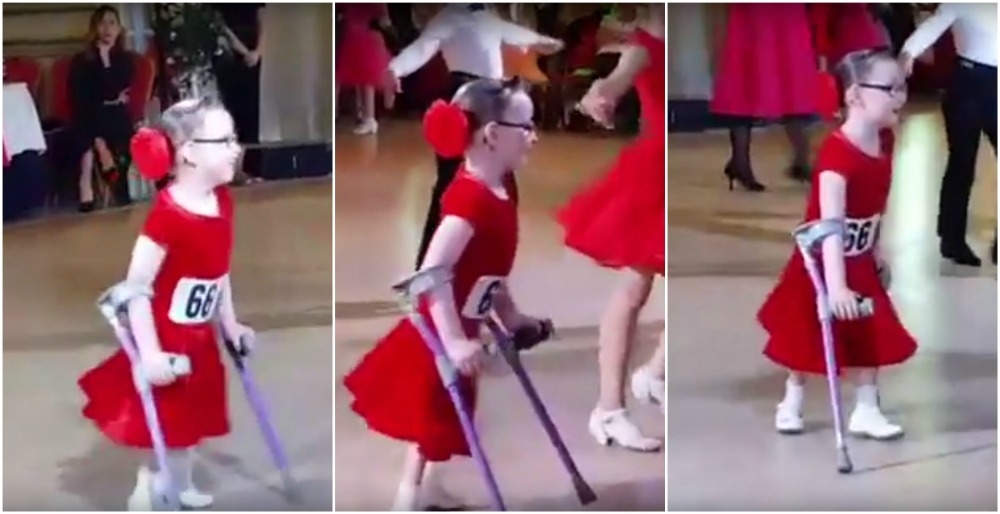 A little girl who was told she may never walk has beaten the odds to dance at the national dancing championships recently.

Ava O’Donovan, whose parents are originally from Tallaght, was diagnosed with spina bifida at birth and was told her abilities would be limited.

A video of the seven-year-old dancing the waltz on her crutches, in time with her fellow contestants, has gone viral.

She competed last Sunday at the All-Ireland Ballroom Dancing Championships in Carlow.

Ava was diagnosed with the condition at birth. Spina bifida is caused when the spinal column fails to form properly while the baby is developing in the womb.

Her mother Sonya, from Millbrook Lawns, said that despite the bleak prognosis given to Ava at birth, she has ‘taken everything in her stride’.

The mother-of-five said: “Ava is as independent as they come. She has to sit in the wheelchair for longer distances and trips like grocery shopping, but insists on using her crutches whenever she can.”

Ava took an interest in ballroom dancing a month before after watching her brother Jack (11), who has been competing for years. Her mother says that ballroom dancing was a left-field choice for Ava who has always been the quintessential tomboy.

Sonya said: “When she saw the dresses and all the prep that the other dancers do, she specifically said. ‘No fake tan!’.

“Ava is a total tomboy. She plays football in the back garden whenever she can and is obsessed with Spiderman and Batman.”

Sonya had ‘no inkling’ that anything was wrong with Ava during her pregnancy.

She said: “Finding out was horrible. It was a rollercoaster from the minute she was born. She was born on a Friday and was sent for a spinal fusion operation at Temple Street on Sunday.”

Despite the numerous surgeries – including an anesthetic-induced operation three days before the Championships in Carlow- Ava has proven her doctors wrong.

In December, she’ll accompany her brother Jack to the World Ballroom Dancing Championships in Paris. The video, which has been viewed over 80k times on Facebook, has already won over some big names in the dancing world.

Sonya explained: “Ava’s been offered a place to compete alongside the other five-to-seven-year-olds and Lorraine Barry, who judges RTÉ’s Dancing with the Stars, asked to meet her when she’s in Paris.”

NEWER POSTWall to stop the joyriders could cost up to €600,000
OLDER POSTShannon donated her hair and raised €2k for Tallaght Hospital