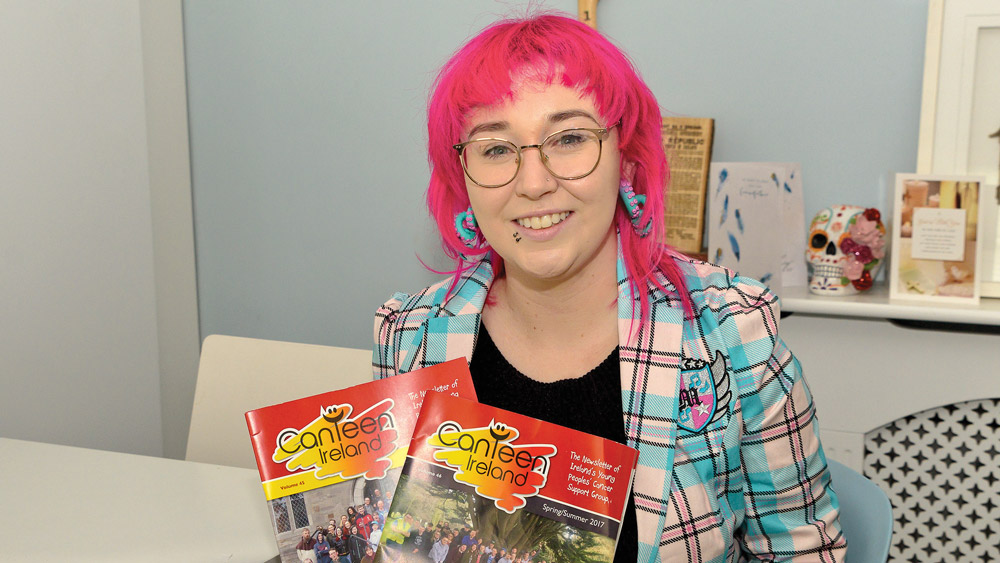 ‘We were told to go away and enjoy Christmas, kind of thing’

AFTER Mariosa Grace-Churchard’s face and neck swelled up, the then 14-year-old thought she was having a bad reaction to hair dye – but within hours, she was diagnosed with cancer.

Mariosa is raising awareness of available supports for young people who have been affected by cancer, with her engagement with CanTeen Ireland massively helping her mental health.

A few days before Christmas in 2011, the former Our Lady of Mercy student was diagnosed with non-Hodgkin lymphoma after noticing irregular swelling to her face and neck.

“I assumed it was some sort of sinus infection, everyone had the sniffles at the time, it was only four days before Christmas,” the Drimnagh native tells The Echo.

“I was messing with hair dye the night before and I got up to go to school, but I couldn’t put my uniform on, and I thought I was having some sort of reaction.

“My ma’s bringing me up to Crumlin children’s hospital then, nearly dragging me by the ear, telling me I shouldn’t be messing with hair dye.

“I was sent for an X-ray and within 20 minutes, I was told that the cavity between my heart and lungs was covered by a tumour, and it was putting pressure on my organs, stopping the blood getting to my face.

“The first thing I asked was if I was going to die because once you hear cancer, you think death . . . and I was told by the doctor in the emergency room that they didn’t know what was going to happen.”

With the scale of the tumour, Mariosa and her mam Marian were told that she “needs surgery to remove the tumour but might not come off the operating table”.

“My mam just came back and said, ‘I don’t want her to go through that operation’, so they gave me tons of steroids,” she says.

“We were told to go away and enjoy Christmas, kind of thing . . . but thankfully I responded well to the treatment.”

Over the next two years, Mariosa underwent chemotherapy treatment and courses of steroids, which reduced the size of the tumour and “killed the root of it”.

It was during her treatment that Mariosa began to suffer with her mental health, battling bouts of depression and anxiety.

She is encouraging people in similar situations to find somebody their own age to talk to.

“I remember when I was going through my treatment and how hard it was, how isolated I felt,” Mariosa, who is now treasurer with CanTeen Ireland, explains.

“You’re in a ward with all of these children and babies who are sick, and they’re all crying. It’s awful seeing these kids crying.

“It’s very hard, but I’d say try your hardest to find someone your own age, so you have someone to bounce off, someone to check in.

“But when there’s someone your own age who is going through the same thing, it’s easier because they understand what you’re going through.”

Seeking a support for young people experiencing what she was, Mariosa linked in with a CanTeen Ireland support group and it massively helped her cope with the weight of her situation.

CanTeen helps support, develop, and empower young people aged 12 to 25 who have or previously had cancer.

Today, aged 24, Mariosa is cancer free but lives everyday with a series of health complications caused by her treatments, which includes Avascular Necrosis (AVN).

AVN is when bone tissues die due to a lack of blood supply, and this has led to Mariosa having a total left hip replacement, and two shoulder replacements.

Despite the enormity of the impact of cancer on the former Our Lady of Good Counsel student’s life, she recounts her experiences with a great sense of levity.

When she started losing her hair, Mariosa jokes about her mam “hoovering the dog because it was shedding… and then hoovering the hair off my shoulders as well”.

Mariosa emphasises the importance of support networks such as CanTeen, telling how young people don’t need to go through their cancer in isolation.

“I do loads of advocacy with CanTeen Ireland,” she says.

“What I want to do is make so much noise that people have to listen and let people know when they are diagnosed that they know what sort of supports are out there for them, so they’re not lost like I was.

“It would have meant a lot for someone to say, ‘this is what is going to happen and this is the list of supports out there for you’.

“So, what motivates me is saying we need better services, and letting them know what services are out there.”