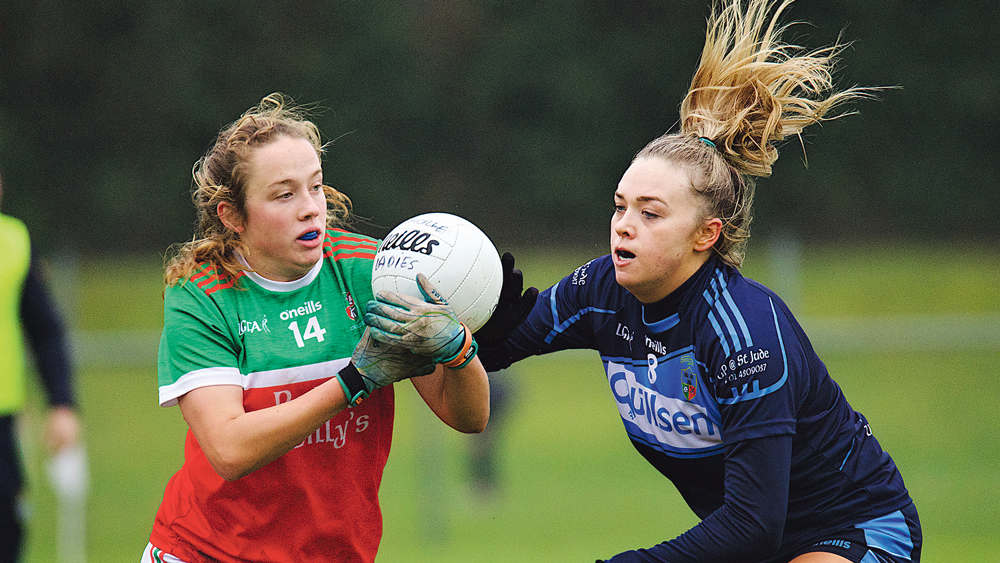 St Jude’s Aoife Keyes puts in a tackle during the Leinster Final. Photo by We Are Dublin

“Why not have a real pop at this?”

ST JUDE’S footballer Aoife Rockett believes her side’s lack of insight into All-Ireland Junior Championship quarter final opponents Tír na nÓg will only drive them on to produce their best when the two sides clash in St Margaret’s GAA Club on Sunday.

The former captain insists there is no room for complacency if the Templeogue side is to build on their county and provincial exploits and book themselves an All-Ireland semi-final berth.

“We’re kind of slightly in the dark in that we don’t know a whole heap about them, so we’re planning for a tough match, but you just never know on the day” Rockett told The Echo.

“Anyone getting to this stage of the competition is going to be decent and there’s just no room for any complacency now.

“In our preparations for the other games you would have a little bit of insight. You’d probably be able to track down videos and team sheets, things like that.

“But we don’t know a lot about this crowd, so we’re trying to stay grounded and not get complacent. You have to prepare for the hardest.

“But the feeling in the squad is good. Everyone’s up for it. Every game you win, builds a bit more confidence.

“If someone had said at the start of the year that we’d be in an All-Ireland quarter final you probably would have laughed.

“The initial target is always the county final and sometimes teams are happy enough with that.

“But when we won the county final, we were definitely gunning for Leinster. We really wanted to give that a good pop and we did thankfully.

“I suppose we never would have been talking about an All-Ireland before Leinster, but every match that you win, it brings it closer and closer to you.

“When you win Leinster then, you’re kind of saying ‘Well why not? Why not have a real pop at this?’ So we’re 100 percent going for it. A Club All-Ireland title would just be out of this world. It’s what you dream of.

“We’ve been training right through Christmas. We didn’t stop at all.

“We got the first training session off after the Leinster Final, but then we were right back at it and we’ve trained right through.

“I think everyone feels that we have it in our sights now and we’re going to see it out and hopefully end on a high.”

Rockett also believes the fact that some ten players in the squad are also enjoying a good run with the club’s senior camogie team will only benefit both sides in their pursuit of success.

“We have, I think, ten dual players that play on the senior camogie team in the club as well and they’re in the Leinster series the week after, so there’s a really good buzz around because we’re still playing out the 2021 season” she continued.

“And that’s just going to bring so much more momentum to both teams starting the season in 2022.

“To have two ladies teams in the club still in a Leinster and an All-Ireland series, we’re getting so much hype in the club. It’s lovely. It’s nice to get that support and recognition” she said.