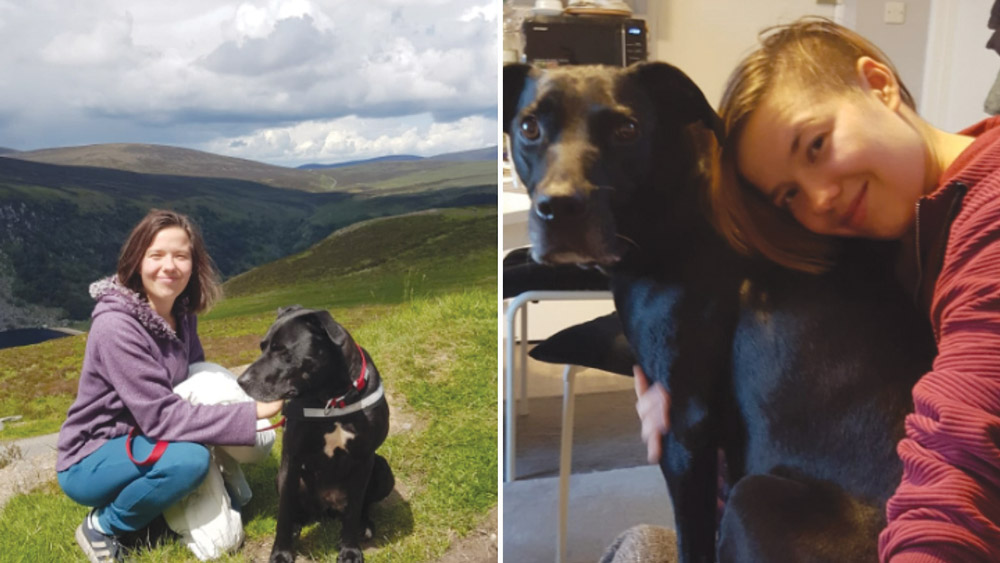 Victoria with her dog Molly

Woman left ‘traumatised’ after her dog is attacked

A CLONDALKIN woman has been left “traumatised” after she and her dog were viciously attacked while out walking by two large “wolf-like” dogs, leaving her dog close to death.

Victoria Sokolowska and her 11-year-old Labrador mix rescue dog, Molly, were attacked by the large dogs while taking their normal route in the Ashwood area of Clondalkin on Easter Sunday morning shortly after 7am.

“I left my house very early and was just hoping to go on a short walk and then have breakfast,” Victoria explained. “I was walking and did a loop on my way home and walked through a green area beside Ashwood.

“I went in through the gate and started walking and there was nothing unusual – I do it 15 times a week. Out of the blue I see these two massive dogs, they looked like huskies and they were bigger than German shepherds.”

According to Victoria, the two dogs had no leads or collars and there was no owner with them on the green space. The two dogs approached Molly and began to sniff her before they began to show signs of aggression.

“The dogs started to growl, and you could see that they were not happy,” explained Victoria. “I decided I was going to back away because I thought maybe they are territorial but as I did, they started to nip at Molly’s legs one after the other.”

Victoria began trying to slowly make her way back to the gate she had come through to get into the green area but as she did the dogs began to attack Molly. 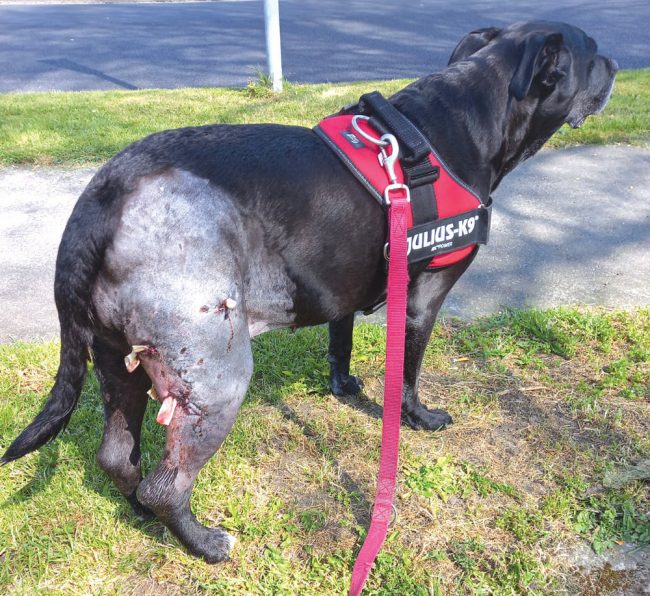 The dog’s leg after the attack

“What they started doing to her, I can’t even describe it. One of them grabbed her leg and the flesh and I could hear her scream. Both of them grabbed a leg each and started to shred it – there was blood everywhere.”

While trying to help Molly, one of the dogs bit Victoria on her leg, tearing a hole in her trouser leg and leaving her with bruising.

After struggling to get away from the dogs, Victoria managed to get to the gate where she called the Gardai and her housemate for help.

Molly was brought straight to UCD emergency vet, where she stayed for two days and underwent surgery for the catastrophic injuries to her legs.

“She is home, and it has been a week, but it is very bad,” said Victoria. “Ahead of us are months of vet visits and every minute of her life she is in pain now. She cannot walk or lie down properly, and she also suffered nerve damage which she might never recover from.

“My vet bills are at over €1,400 euro at the moment, and this is just the beginning- I have to be at the vet every two to three days.”

Victoria says that she has suffered anxiety since the horrific attack and is now fearful to walk Molly, who needs short walks to help her leg. She is now trying to raise awareness for other people who may be walking in the area.

“If that gate wasn’t there I wouldn’t be here today,” she explained. “They would have killed my dog and done the same to me and we would both be on that field in pieces.

“I walk this route so often but I have never seen these dogs before or anybody walking them so I think they are kept in the backyard and used to fight because what they have done to my dog and no normal dog would do that.

“I consider myself and my dog very lucky to be alive, but I want everyone in the area to know what happened because a child, a small dog or an elderly person walking a dog could have been killed.”