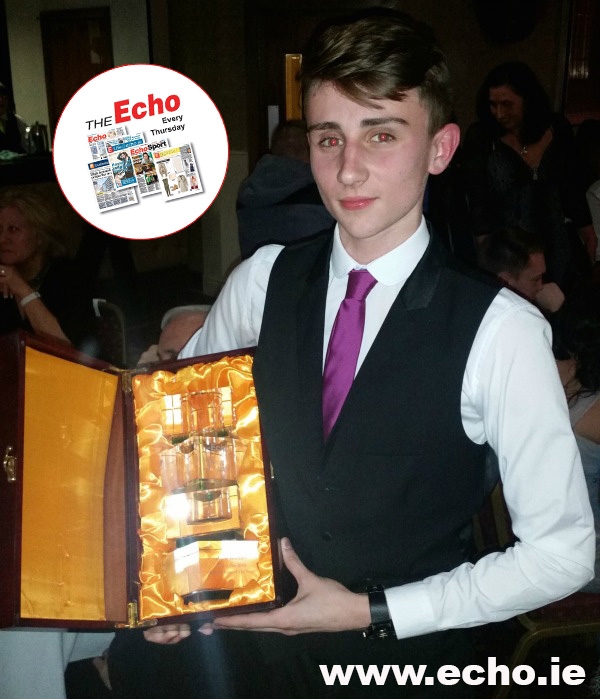 Echo Sports Awards 2015: And the winners are…

On a night when the local sporting world came together to recognise and celebrate the achievement’s of our sports people and teams in the Green Isle Hotel, South Dublin Taekwondo’s Jack Woolley and Ballyboden St Enda’s were some of the big winners.

Woolley, an already accomplished martial artist at the tender age of 17 from South Dublin Taekwondo, picked up the Echo Sports Star of the Month award for April after he finished on the podium at both the US Open and Spanish Open.

Following this the rising star went on to record notable wins throughout the year at senior level, including taking bronze, silver and gold medals at international events in Poland, Israel and Russia respectively.

Added to this, the South Dublin Taekwondo starlet brought his junior career to a close with a silver medal at the Junior European Championships in Latvia in October.

Now ranked a remarkable 14th in the world, Woolley is set for a glittering career on the mat, and will be pushing strong for Olympic qualification next year.

In the Team of the Year category there were plenty of frontrunners, but Ballyboden St Enda’s senior footballers clinched the accolade after they completed a historic year, adding the Leinster title to the county crown they won in November.

Beating the likes of St Oliver Plunkett/Eoghan Ruadh and St Vincent’s on their way to the Dublin Championship, Andy McEntee’s men then went on to lift the Leinster title in dramatic fashion when they beat the much fancied Portlaoise last Sunday.

In some of the other awards on the night, Greenhills Archers scooped the Club Development of the Year trophy for their work in building the club over the last 12 months.

While Donore Harriers were named Club of the Year after 12 months of unrivalled success from Juvenile to Masters level, taking more then 50 medals at juvenile level, including 20 gold.

And Coach of the Year went to Oblate Dynamos’ Terry Staunton after he led the club’s ladies team to the Women’s National League Basketball Division One title.

Meanwhile, Volunteer of the Year was awarded to Edward O’Riordan for his continued work with the Cumman na mbunscoil.

There was also a very special Hall of Fame award given to the family of Paddy Hyland who sadly passed away this year.

Paddy, a boxing legend throughout Ireland, coached more than 50 national champions, including his three sons who all won national pro titles.

Finally, some of the local members of the Irish Special Olympics team who competed so well in the LA during the summer received special recognition awards.

All in all it was great night for the local sporting community, and to make it even better, the Twitteratti helped us make the #echosportsawards2015 trend on Twitter, ranking the fifth highest trend on the night.

And don’t forget to pick up your copy of next week’s Echo for all the pictures and reaction from the night.

NEWER POSTHeroin worth €420,000 seized by Gardai in Clondalkin
OLDER POSTGarda searches at Newlands Cross lead to a €1.5 million drug haul