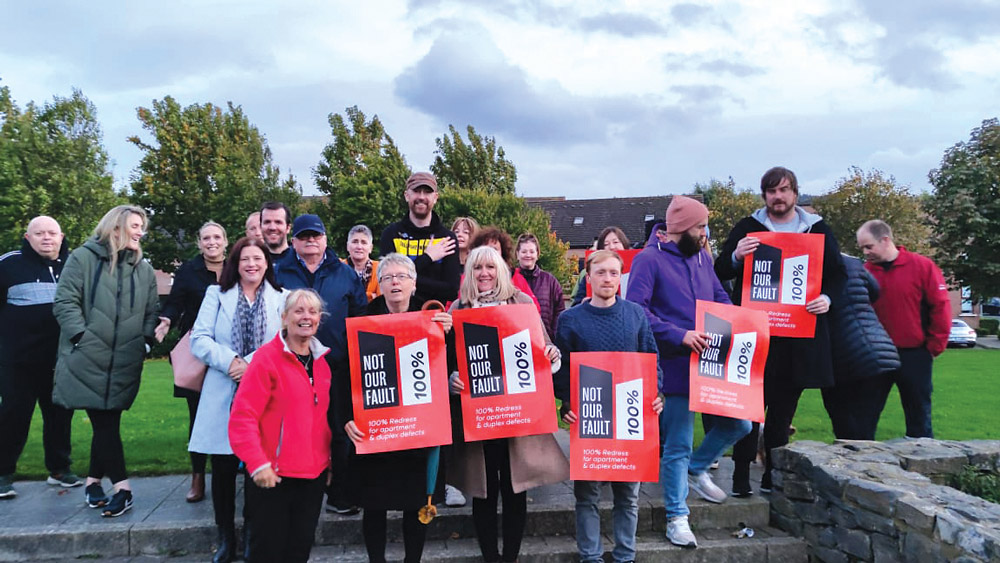 THE first sign that residents in Park West knew there was defective issues in their development, was in 2019, when an approved housing body was planning on moving tenants into 10 apartments at the Crescent Building.

An inspection of the properties prior to New Beginnings moving in tenants, revealed fire and safety defects.

Today, property owners in the development are facing the nightmare scenario of a €68k bill to fix a problem not of their doing, and a demand of a €15k first installment by the end of this year.

The complex, containing 232 units over nine blocks, was built in 2003, during the Celtic Tiger.

The builders responsible are still in business, but trading under a different name – a situation similar to potentially 100,000 homes across the country, according to a report commissioned by Housing Minister Darragh O’Brien.

Homeowners who bought apartments or duplexes in developments across the county with these problems are living a daily nightmare, unable to sell their property, facing serious financial difficulties, and even if support from a redress scheme is forthcoming, and there is no guarantee, it will not be a quick fix.

“Nobody can sell their apartment here for at least the next ten years – we have an asset that is worthless. People are going to be living in fear for the rest of their lives – it is a total shitshow,” said Sam Doran, a Crescent Building resident.

At a recent AGM via zoom with management company Keenan Property Management (KPM), owners were informed of the whopping bills per apartment.

“We were hit with this bombshell – who has €68k ? – what about people here with kids who want to move on,” said resident Teresa Power.

The Echo met a number of owners in the carpark of the Crescent Building last Thursday, where fear and anger were two of the prevailing emotions.

The group know of other developments in the wider community that will be facing similar issues down the line, and have already started collaborating with residents in Hunterswood, Balllycullen, where 250 apartments and duplex owners are facing a similar problem.

Park West residents say they have been threatened by the management company that if they don’t pay up the first €15k there is a threat of closing the building.

“We have also been told if we can’t or don’t pay this then they would have to take legal action against us, and we have the threat of our current insurance company pulling the plug on us at the end of the year,” said a resident.

The group feel safety in numbers is their only chance, and are determined that they will not pay a euro until they can determine what sort of plan the government will decide on in the coming months.

Nothing was included in the recent Budget for apartment and duplex owners.

Sinn Féin housing spokesperson, Eoin Ó Broin believes the remit of the pyrite redress scheme should be extended, and a mechanism put in place for retrospective funding, along with a fund for emergency works.

He said it is “a scandal in itself” that there is “no consumer protection for the most expensive purchase most people will ever make” – a home.

“It is my view that those directly responsible should pay. It is not possible for home owners to pursue developers, and if they cannot, the State should take responsibility,” said Deputy O’Broin, who doesn’t get a “sense of urgency” from Housing Minister O’Brien on the crisis.

He said it is Sinn Fein’s view to add another €200m to the kitty for those living in mica, pyrite or Celtic Tiger defective homes, and terms need to be amended to include the scope of the Pyrite Resolution Board.

In the carpark at Crescent Building, residents say they formed their own WhatsApp group to inform other owners – not all of whom are yet in the group – and bridge secrecy over the issue, claiming KPM have not been upfront with them.

They only recently paid €600k on fire alarms and extinguishers for the development.

Mr Doran says legal advice they received, is not to vote on a schedule of works for the defects lest they be “liable to be sued” once entering an agreement, which most will never be able to meet financially anyway.

“KPM can’t tell us anything – they are supposed to work for us. The fear for people is what to do at Christmas and beyond. I’m lucky I have a place to go, but others don’t have that option,” said Ms Power.

Resident Ravi Puthran bought a three-bed apartment eight years ago, and as an Indian national living in Ireland for 14 years, feels this is “almost fraud”.

“It is the only asset I have in Ireland, for me, my wife and our daughter,” said Ravi.

“We need to keep the insurance, fire safety officer and management company off our back, and fight for our share from government.”

Tracy O’Brien, from a neighbouring apartment block doesn’t feel the current management company can be “trusted with a €15m project”.

A common denominator for residents is that they want a new management company.

“With the memo that has gone to government, we need to know what government are planning and for management to back off,” said Mr Doran.

“This is a threat to property not to life – it shouldn’t warrant a closure order.”

Mr Doran said the group is willing to work with other developments who will be facing similar issues going ahead.